The aim of the FLS Group’s research is to develop new methods in the generation of high brightness X-ray photon pulses that would allow the spatiotemporal imaging of events at the atomic scale (~1 Å, ~10 as (atto-second)). The spatial and temporal resolution available from such x-ray pulses would make feasible the observation and ultimately the potential to control ultra-fast, optionally non-linear, atomic processes. With the ability to probe correlated electronic processes within atoms at these timescales, to measure how electrons and nuclei reorganise themselves, either individually within atoms due to external stimulus, during molecular bond making and breaking, or while undergoing subtle catalytic or biological processes, we can begin to unravel how all matter functions at this fundamental level.

A UK XFEL facility would provide such novel output and address future science and technology questions aligned with government Industrial Strategy and Grand Challenges. There will also be new challenges and strategies that emerge. Advanced XFEL designs offer cutting-edge tools for imaging matter at the natural spatial and temporal scales for many important processes: such capability will remain a core requirement for all scientific and technological research that depends on an understanding of how matter works at the nanoscopic and quantum level, and will enable the development of new technologies based upon that understanding.A UK XFEL would be a major facility costing of the order of £1 billion, providing users with light into the 2050’s. It would be part of a network of international facilities, each generating unique types of light unavailable elsewhere. A UK XFEL will therefore be a cutting-edge machine from first light.

Examples of some of our recent work include: 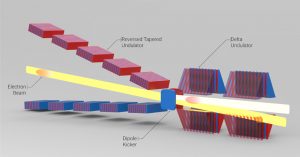 First simulations of structured light output from an FEL 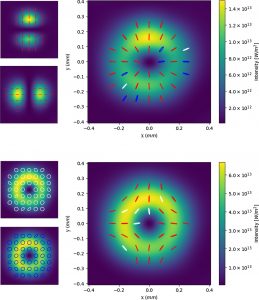 Simulations of sub-attosecond pulse output in an X-ray FEL