Bose-Einstein Condensates (BECs) are a new form of matter with quantum mechanical properties, the super-cooled atoms behaving more like waves and less like discrete atoms. First created in 1995 [1], BECs are coherent matter-wave fields with a well-defined phase that allow the study of a wide range of phenomena and that can be used to probe the boundaries between classical and quantum physics.

We are interested in the propagation of structured light through ultracold atoms [2]. We model this using evolution equations for the atomic field and the optical field. By coupling the interactions of the two fields, highly nonlinear dynamics are observed. These dynamics can be exploited to obtain optical fields that are light or dark seeking with respect to the BEC, occurring in both self-focusing and self-defocusing media, controlled by the scattering properties of the BEC. 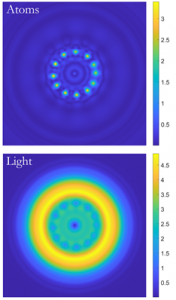 We demonstrate the formation of interleaved and coincident filamentation patterns appearing in both atomic and optical fields. Using the Non-Polynomial Schrödinger equation to include an alternative two-dimensional description of the evolution of the atomic wavefunction [3], we show that this filamentation process can be enhanced and, in select cases, stabilized to prevent its onset entirely if additional non-linear terms describing optical saturation and three-body loss [4] are included (shown on the right for a Laguerre-Gaussian pump with both radial and orbital angular momentum, l = p = 1).

Our aim is to investigate the effect of OAM on these filamentation patterns and stable structures observed.